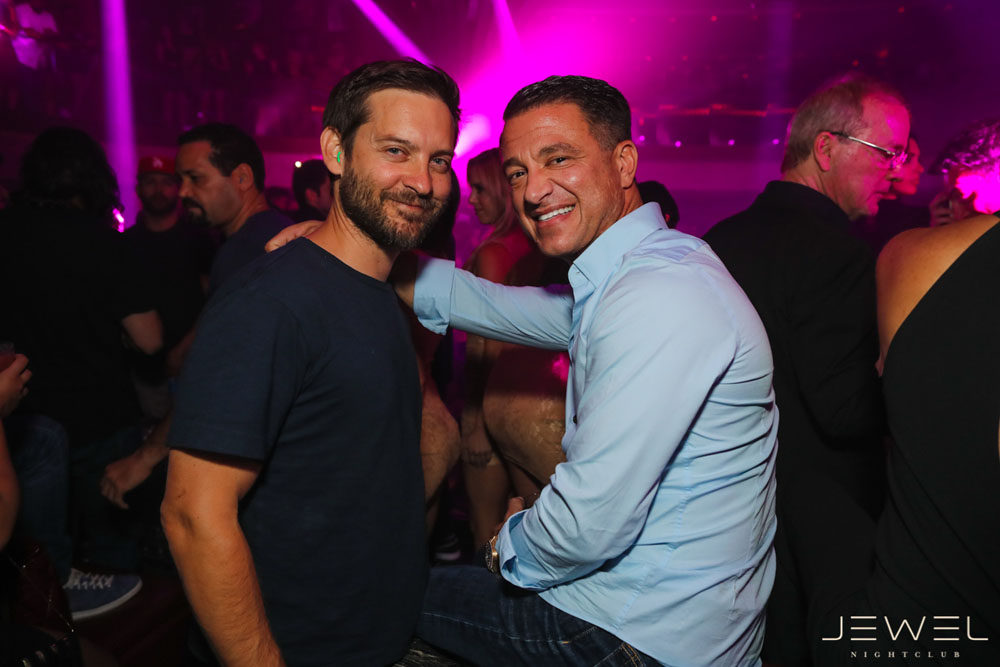 Last night, Saturday, July 9, renowned actors Leonardo DiCaprio and Toby Maguire returned to JEWEL Nightclub inside ARIA Resort & Casino for the second night in a row. In town to watch UFC 200, “The Great Gatsby” costars arrived to Vegas’ newest nightlife destination around 1:00 a.m. with a large group of friends.

The actors were seen in high spirits as they socialized at their VIP table near the dance floor while special guest host Jamie Foxx alongside DJ Irie were playing chart-topping hits for the packed crowd.

The actors could be seen enjoying their night out, sipping on cocktails and mingling with friends, before leaving the nightspot around 2:30 a.m.

Adding to the excitement of the night, rapper Ja Rule was spotted at the nightspot and joined Foxx atop of the DJ booth for a surprise performance. Also seen enjoying the show was newly drafted NFL quarterback Jared Goff as he sipped on champagne and took in the sights of the packed hot spot from inside the DJ booth.

It was an eventful day at the resort as DiCaprio was spotted dining at Herringbone Restaurant earlier that afternoon. The Oscar winner dined with a large group of friends, which included fellow actors Matt Dillon and Ethan Suplee, among others.

Enjoying a late brunch, the group arrived around 1:30 p.m. and dined on a number of signature Herringbone dishes including, Orange Ricotta Chocolate Chip Pancakes, Steak and Eggs, Bobby’s Sliders, and Wings.

Dressed casually in light blue shorts, a t-shirt and hat, DiCaprio looked handsome as usual as he and his group sipped on everlasting bellinis and a variety of other cocktails before leaving around 3:30 p.m.

Also spotted dining at the coastal cuisine restaurant was Jamie Foxx as he was seen munching on a variety of signature dishes before making his way to LIQUID Pool Lounge at ARIA, earlier in the day. Foxx joined DJ Irie at the daytime hot spot where he interacted with the excited crowd, spraying champagne onto guests in the pool and jumping on the mic from the DJ booth.