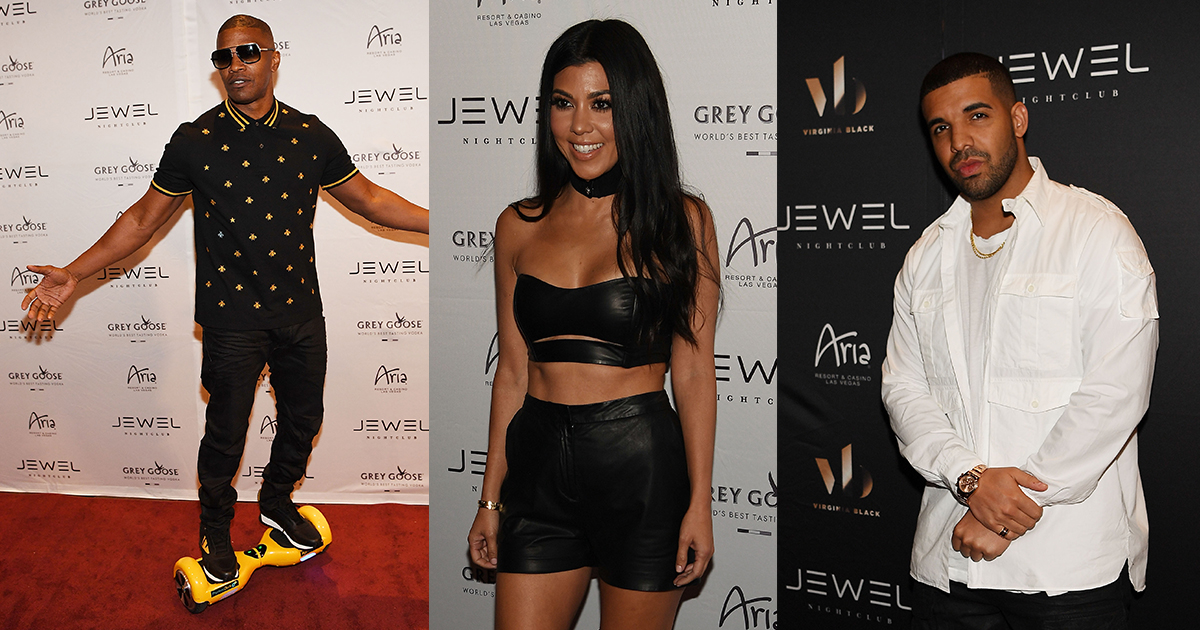 JEWEL Nightclub, located inside ARIA Resort & Casino, made its highly anticipated debut as it opened its doors to the public for the first time on Thursday, May 19. The four-day celebratory affair included world-renowned artists and celebrities while showcasing the standout venue.

Arriving to the premier nightspot just after 12:30 a.m. on Thursday, May 19, Grammy Award-winning artist Jamie Foxx made his way to the red carpet in style as he rolled in on a yellow hoverboard alongside resident DJ Irie. Laughing and joking around with his guests and photographers, Foxx showed off his segway moves as he posed for photos. Stopping to chat for a bit, the Academy Award-winner waived to nearby fans and mentioned how excited he was to be a part of such a remarkable Vegas premiere.Making his way into the luxurious new venue, Foxx rolled into the DJ booth as hundreds of fans shouted his name. As he arrived, Hakkasan Group President Nick McCabe greeted the star, and the two posed for a photo with a stunning five-tiered, JEWEL themed cake to commemorate the celebration. Kicking the night into high gear, DJ Irie hopped onto the decks and began playing a number of chart-topping hits. As the singer took over the mic and addressed the crowd, the energy in the sold out room soared with excitement. Throughout the night, Foxx had the entire nightclub on their feet as he sang along to his favorite hits and showed off some of his best dance moves from atop of the DJ booth. Later in the evening, Foxx spotted fellow artist and JEWEL resident DJ Lil Jon at a nearby VIP table and invited him to join him in the DJ booth. Partygoers cheered with excitement as Lil Jon made his way through the crowd and jumped on the decks for an impromptu performance. Toasting with champagne and handing out shots to their guests, Foxx and Lil Jon brought the party to an unrivaled level with their energy and excitement. Foxx kept the party going into the early hours of the morning, making night one of JEWEL’s grand opening weekend an unforgettable affair.

JEWEL’s grand opening celebration continued into Friday, May 20 with a special surprise performance by GRAMMY Award winning artist, Drake. Arriving to the nightspot round 2 a.m. the multi-talented musician hit the red carpet and posed for photographers before making his way into the nightclub. Shortly after his arrival, his DJ Future hopped on the decks and got the crowd ready for a very special surprise. As the anticipation in the packed room built up, the lights went dark and Drake got on the mic to address the crowd and announce himself. The entire room erupted with excitement as he appeared on a stage located in the DJ booth and welcomed guests to JEWEL. In a moment that is sure to be remembered for many years to come, Drake performed a number of his hit songs including “Energy,” “Jumpman,” “Running Through The Six” and his latest “One Dance.” Throughout his performance, he had the entire venue on its feet dancing and singing along. Deciding to take a moment from his set to talk to his fans, Drake announced “Shots on me!” and as hundreds of guests cheered uncontrollably, JEWEL staff began handing out shots to all, making for a truly remarkable experience. Adding to the excitement that same night were a number of celebrity guests in attendance including boxing champion Floyd Mayweather, model and socialite Chantel Jeffries, television host Michael Strahan along with girlfriend Kayla Quick, and Denver Broncos outside linebacker Von Miller.

Rounding out the celebratory weekend on Saturday, May 21, turntable duo The Chainsmokers made their way to the nightspot for their highly anticipated JEWEL debut. Arriving to the red carpet just before 1 a.m., the artists stopped to take photos as fans crowded around to catch a glimpse. Also joining the group was singer Halsey. Dressed in an adorable white strapless dress adorned with flower embellishments, the artist posed as she wowed photographers. Excited and full of energy, the group made their way into the DJ booth located in the main room where The Chainsmokers kicked off their set and spun a number of their chart-topping hits all throughout the night. Later in the evening, resident DJ Lil Jon stopped by to greet The Chainsmokers in the booth. Hopping on the mic, Lil Jon addressed the crowd and hopped on top of the DJ booth to greet fans. The room soared with excitement as they cheered and danced all night long.

Shortly after 1 a.m., Kourtney Kardashian made a surprise appearance and hit the red carpet. Looking stunning in all black leather, a crop, high waisted shorts and thigh high boots, the beautiful mom of three posed for photographers as she waived to nearby fans. Also joining her was long-time friend Malika Haqq who jumped onto the carpet to take a quick photo with Kardashian. The two then made their way into a VIP table located next to the DJ booth where they sipped cocktails and danced the night away with their friends.

Also in attendance was celebrity Chef and TV personality, Ann Burrell, as she enjoyed her time at a VIP table inside Vegas’ hottest new nightspot.

Closing out the four-day affair, multi-talented artist Lil Jon made his way into the packed nightspot on Monday, May 23, where he took his place inside the DJ booth around 1 a.m. As he prepared for his debut set, fans and partygoers alike cheered uncontrollably. Kicking off his set, the entire room lit up as the CO2 blasted into the air. Playing hit after hit, including “Turn Down For What,” “Get Low,” and “Outta Your Mind,” among many others, Lil Jon had the entire main room and mezzanine on its feet as they dance and sang along into the early hours of the morning.